N-BiG represents a wide range of members from private sector and academic and research institutions across the Namibian bush-biomass sector. We drive innovation and technology development and offer technical expertise on biomass value chains. Part of our mandate is to explore market opportunities and promote industry diversification. Through the Advisory Service, our advisory services division, we support capacity development by providing training and mentorship programmes on sustainable bush control and biomass utilisation.

N-BiG was founded in 2015 under the auspices of development cooperation between the Government of Namibia and the Federal Republic of Germany through the Bush Control and Biomass Utilisation Project implemented by the Ministry of Environment, Forestry and Tourism (MEFT) and the Deutsche Gesellschaft für Internationale Zusammenarbeit (GIZ).The organisation was further supported by its founding members to grow its membership base . It strives to address one of the most widespread economic and social challenge in Namibia, bush encroachment.

The phenomenon affects an estimated 45 million hectares of rangeland, multiple ecosystems and land use in the country, both in communal and commercial areas. At the same time, bush encroachment and the budding biomass sector go together, yielding a huge new opportunity by creating value from the resultant biomass. There is considerable market demand for woody biomass in existing and future market segments both locally and internationally. Everyone can benefit from the commodification of biomass, from large players to small and medium-sized enterprises (SMEs) and landowners offering alternative income and employment opportunities.

The biomass sector currently employs at least 1 per cent of the Namibian agricultural sector’s workforce, with an estimated 10,000 workers in the charcoal value chain. N-BiG looks forward to growing its membership base and rolling out its services and projects in order to support its members and to develop the biomass industry in Namibia as a whole. 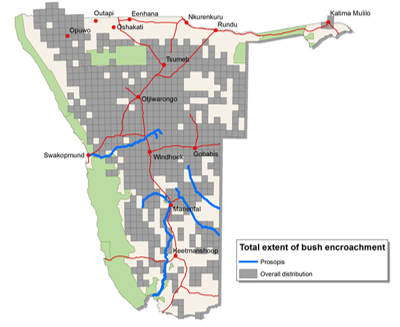